Lately, We have been busy in the workshop working on a new batch of Croatian traditional filigree earrings, so sharing a couple of photos of the finished earrings.

These earrings ( locally known as “košarice” ) are part of the 17th century traditional Croatian jewelry typical for the Split region in Dalmatia.

They were traditionally made from sterling silver and solid 14k gold. Either plain or adorned with small beads of Mediterranean coral or natural freshwater pearl. Today, we also have a gold plated sterling silver variant.

Lot of work on these earrings is still hand-made, especially on the beaded version where each pearl connects with the filigree frame of the earrings with small wire which needs to be threaded by hand. 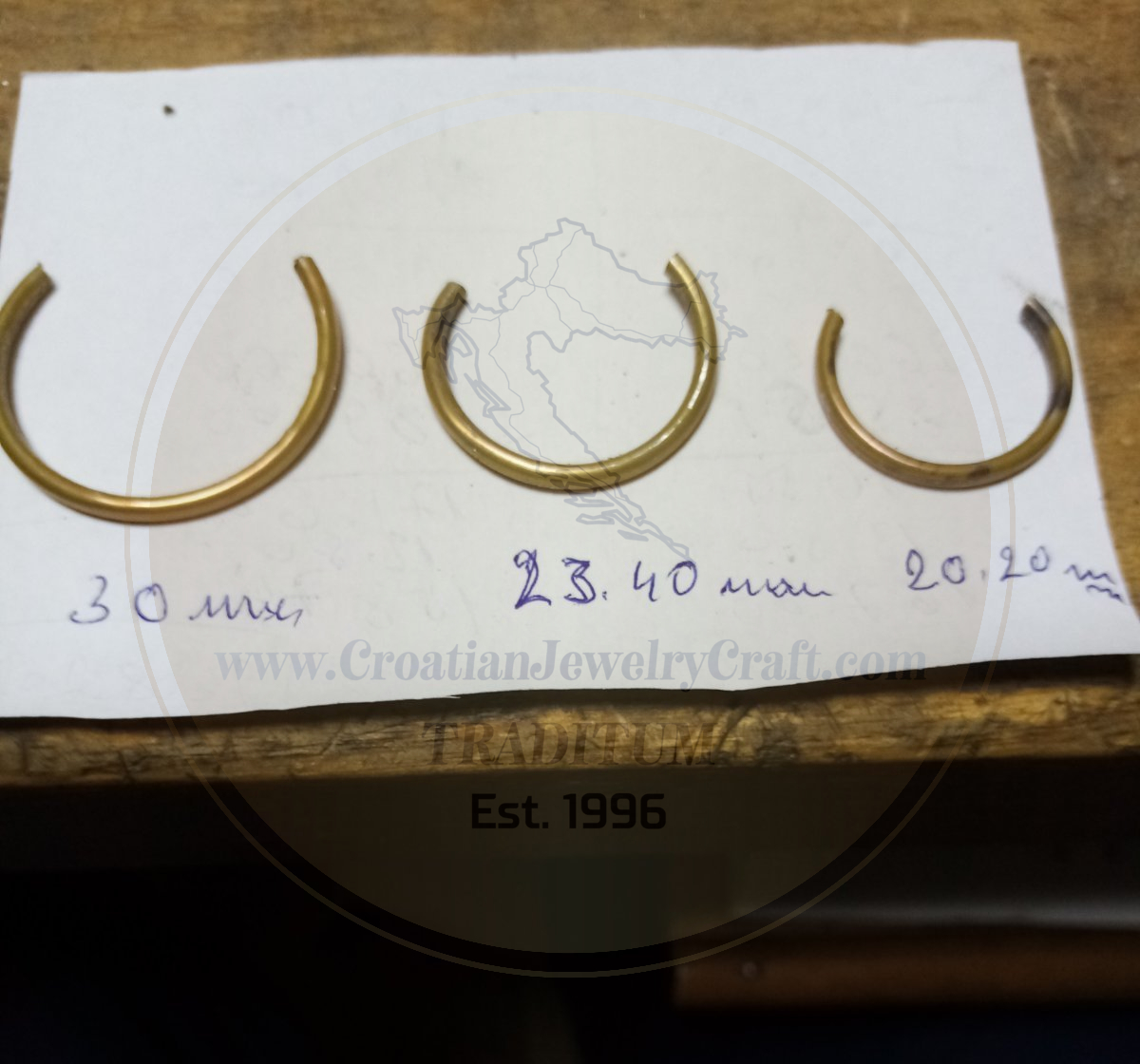 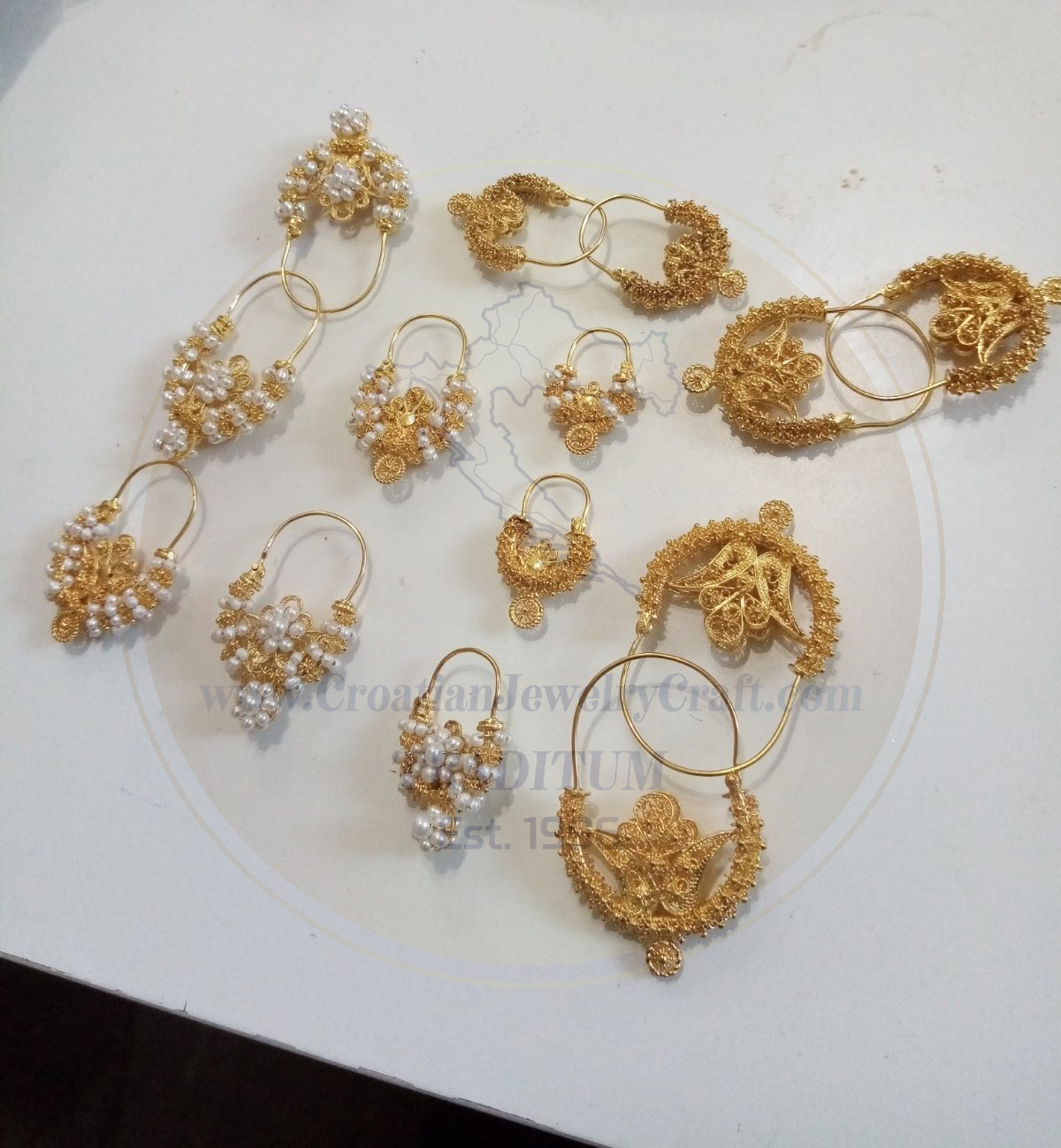 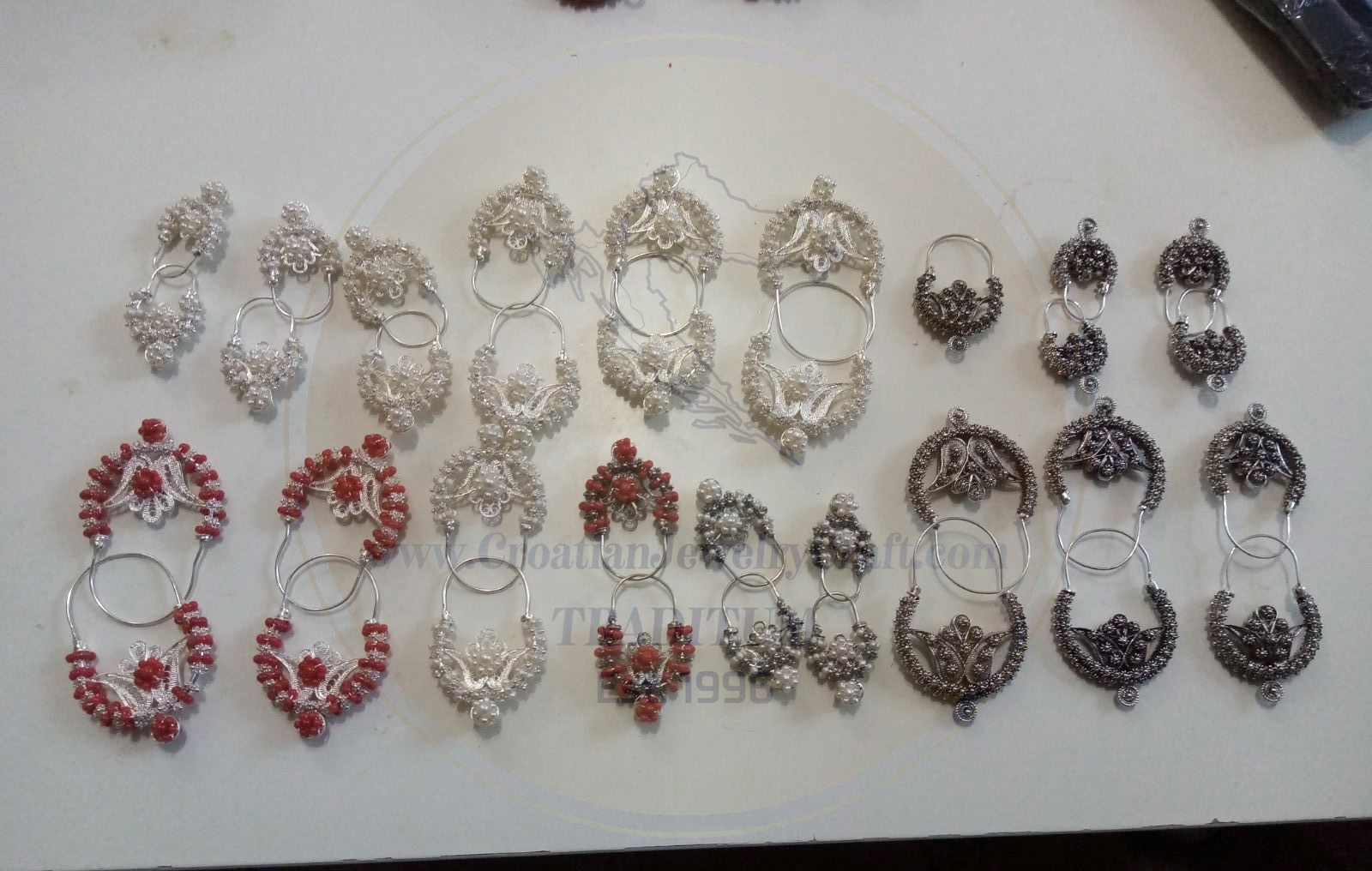 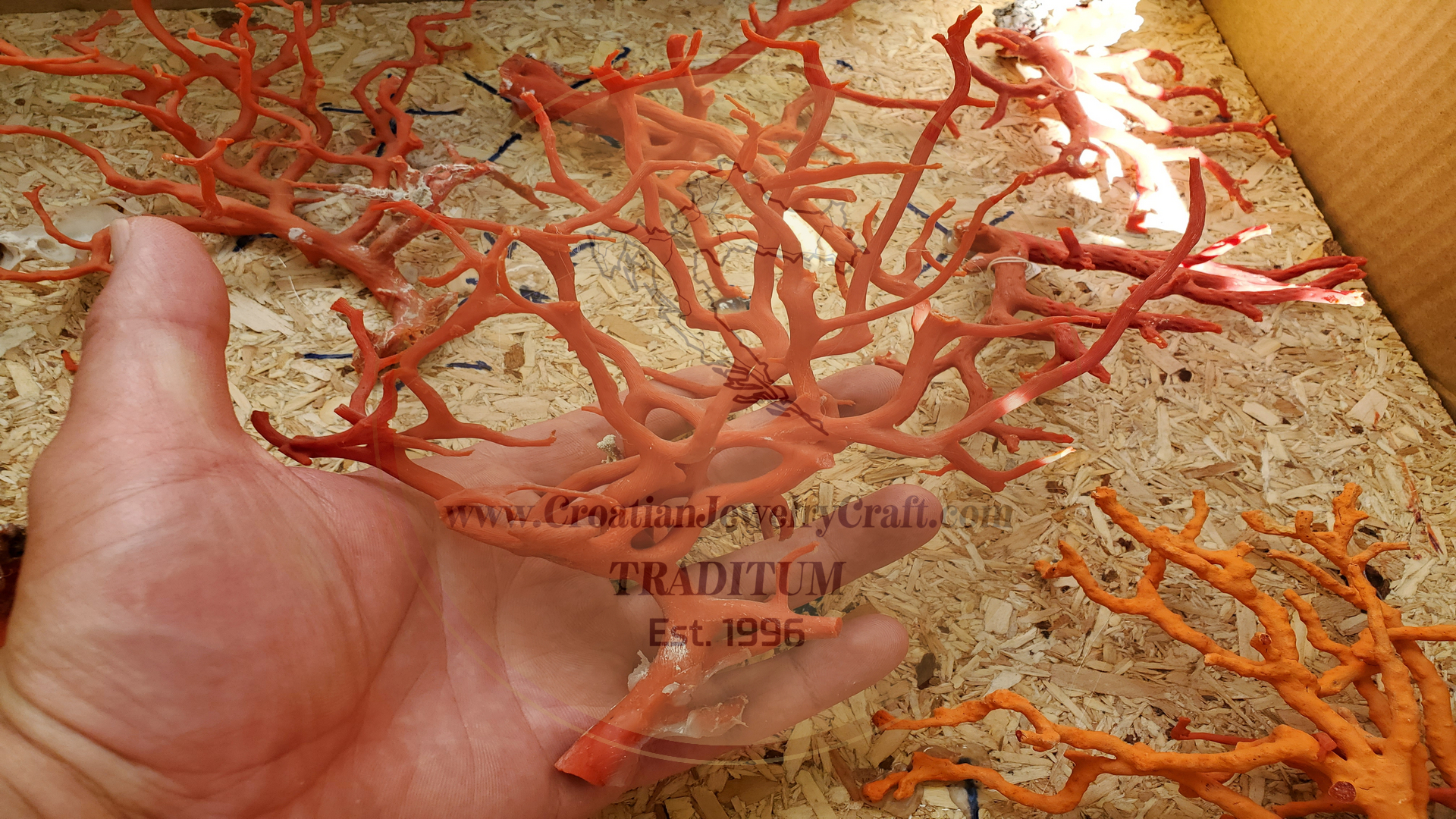 Shown on the above photo are samples of the large and nicely-formed Mediterranean coral branches which were on display in a jewelry gallery.

Harvesting of the Mediterranean coral is officially regulated in order to achieve non-intensive exploitation. Mediterranean coral is usually very small in size, and due to the climate-changes, prone to coral diseases and parasites. For this reason, branches such as these are old, very rare and are not being processed into jewelry making material.

Depending on the size and condition of the coral branches, they are processed either  into branch-formed pendants & earrings, or coral beads.
First steps in turning raw coral material into jewelry are always manual:  delicate coral branches in their natural state are covered with crust ( branch on the bottom right ) and they first need to be initially cleaned and inspected for structural defects. Next step is to grade and then separate the material for further processing.

This separation and processing creates a lot of waste material which is not suitable for direct implantation into jewelry, but it gets repurposed for other uses, so none of the precious material gets wasted. 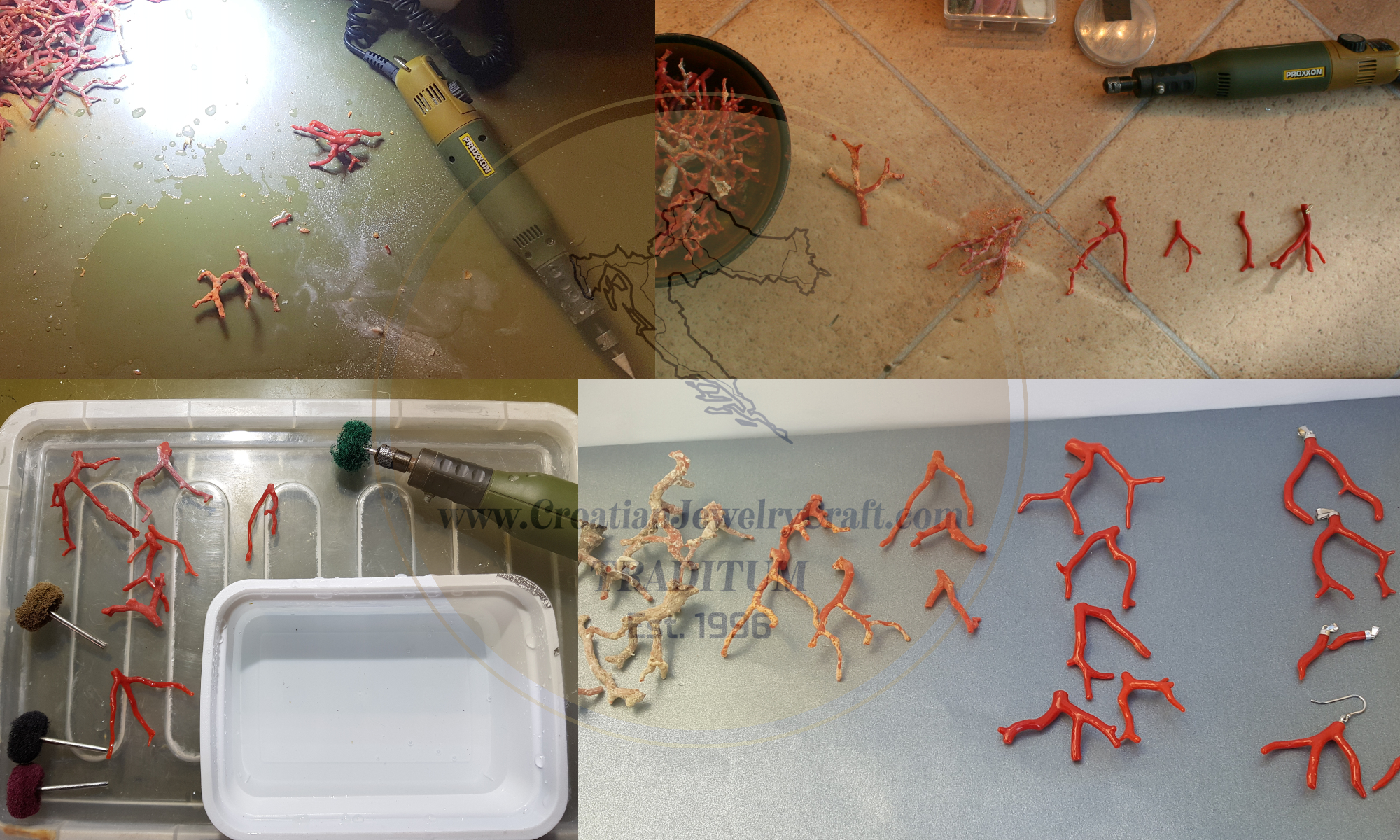 Most closer-to-natural jewelry style is achieved by keeping the branches in their naturally-formed shape and turning them into pendants, earrings and necklaces made up of individual coral branches.

On the above photo, the entire process of turning the raw branches into earrings and pendants was done manually with only basic tools but with a a lot of patience and experience.

This is rewarding but meticulous and time-consuming work. Branches are cleaned, cut, formed, and polished several times until they become suitable to be implemented into the final jewelry product. Because of all this, jewelry made from Mediterranean coral is unique and valuable.  Coral branches that we have on offer are either fine polished to high-gloss finish or polished to satin finish for closer to natural surface look.

I am current owner of the Traditum jewelry craft which I have inherited from my parents.
My father started to design and create jewelry in his teenage and has continued doing this for nearly 50 years along with my mother.

Same as with the jewelry for which We were rewarded with an “Authentically Croatian” certificate,  our former “brick-and mortar” jewelry shops were also handmade. They were custom-designed by my father, and hand-built by my family.

Our two shops were located in Dubrovnik old town, and a small istrian town called Grožnjan. Dubrovnik shop was open for 15 years before it was closed two years ago.

Due to its location inside of the old building with preserved stone arches, and custom-designed interior, Dubrovnik shop was one of the most uniquely-designed shops in the old town.

On the two collage photos which I would like to share with you, you can see the initial state of the interior which was no more than bare walls.

However, shopping habits have changed and online-shopping has taken-over the habit of shopping in small physical shops.
So We have decided to build our online-presence and offer our jewelry creations through our WebShop as well as on the online-marketplaces which specializes in handmade items such as Etsy.

In my first blog, I am going to write a short story about Croatian filigree jewelry.
Meticulously handcrafted by skilled goldsmiths, old-original pieces of this jewelry were inherited from generation to generation, and today they are kept at the museums as a part of Croatian folk heritage.

Traditional filigree jewelry was spread across the Dalmatia region.
Made in a couple of different filigree patterns and  incorporated into various jewelry items such as the earrings, pendants, necklaces, rings…

Today, this jewelry is made in authentic, traditional styles, as well as by incorporating traditional elements into current, modern jewelry trends.
Two most common forms are filigree ball (Botuni) jewelry and filigree hoop (Konavle) earrings.
In recent time, Konavle earrings gained media exposure from being worn by Queen Rania and Croatian president.

The name botun refers to round or circular buttons, which adorned various male folk costumes. It was declared as the most original Croatian souvenir in 2007 by the Croatian National Tourist Board.

Typical for Dalmatia region, they consist of two half-spheres made in filigree technique, which are connected through the middle. Made in a couple of different filigree patterns, from silver or gold material.

Oblong-shaped earrings with hollow filigree-decorated frame made from silver or gold. Adorned with small beads of either Mediterranean coral or freshwater pearl, suspended from the bottom of the earrings.

As part of the traditional women’s Konavle folk costumes, they were made by skilled goldsmith masters.
Traditionally, these earrings were the gift that the young men would present to his fiancée at the wedding:

Small verižice while proposing, and then the large ones during the church wedding ceremony.
So it was considered as a rule that the small ones were worn by unmarried women, while those married wore large ones.

This website uses cookies to improve your experience while you navigate through the website. Out of these cookies, the cookies that are categorized as necessary are stored on your browser as they are essential for the working of basic functionalities of the website. We also use third-party cookies that help us analyze and understand how you use this website. These cookies will be stored in your browser only with your consent. You also have the option to opt-out of these cookies. But opting out of some of these cookies may have an effect on your browsing experience.
Necessary Always Enabled
Necessary cookies are absolutely essential for the website to function properly. This category only includes cookies that ensures basic functionalities and security features of the website. These cookies do not store any personal information.
Non-necessary
Any cookies that may not be particularly necessary for the website to function and is used specifically to collect user personal data via analytics, ads, other embedded contents are termed as non-necessary cookies. It is mandatory to procure user consent prior to running these cookies on your website.
SAVE & ACCEPT